When the Universe Conspires

Sometimes things are so intertwined, it’s hard to sort through the tangled ball of yarn of events that connect the parts of your life.

That is what my life is becoming. A tangled ball of yarn.

A wonderful, connected, amazing, beautiful tangled ball of yarn. I pull on one piece and it pulls another in close. I pull it back the other way, but it is still connected.

Two and a half years ago, I posted a piece about the Wyoming Women’s Antelope Hunt. At that time, I felt the impact of the hunt, but I never could have imagined how it was about to change my life. That hunt gave me the confidence to go on other hunts. It gave me the determination to learn everything I could about hunting. From equipment to ecosystems, I soaked it all up.

I devoted quite a bit of time continuing my fly fishing journey, but I also started to give hunting just as much attention. These activities provided me with a deeper connection to the outdoors and a deeper love and appreciation for the land around me. I also began to recognize the part that Shelley played in all of this.

For those of you who haven’t read Sisters of the Sage, Shelley is the donor of the scholarship I was awarded so I could attend the Wyoming Women’s Antelope Hunt. Shelley knew what this hunt could do for women. She arranged it so that every year one woman would attend the hunt through her generosity. And, I know I wouldn’t have continued down this road if it hadn’t been for Shelley and the connection I felt with her. This connection isn’t one of a long time friend or mentor. Shelley passed away before I was even able to meet her. The connection stemmed from those who love her and those who believe in her vision. It stemmed from those people who were willing to share the essence of Shelley with me and the voice and tone in which the scholarship was given.

As my life continued to evolve and gain momentum, I realized that it wasn’t just the scholarship that changed me. It was Shelley’s ability to see the impact this COULD have on a woman. It was the forethought and generosity shown by her. That is what impacted me the most. This concept…it truly inspired me to live my life. It took one person to inspire me to live my life. The impact, forethought, and generosity of one woman inspired me to take it further. That is where #onewoman began. With the realization that one woman can inspire someone to live their life, and the effect that has on everyone around her.

This last fall, I hosted a ladies beginning fly fishing camp at our cabin in the Laramie Range. Six women came from around the state of Wyoming and Colorado to learn how to fly fish and enjoy the fellowship of newly made friends. I shared my story with them and the story of our cabin. I shared Shelley with them so they understood the impact of #onewoman. The weekend was a successful endeavor, and at the end the ladies gave me a gift certificate. I used the gift certificate to buy a new rod, personalized with #onewoman. 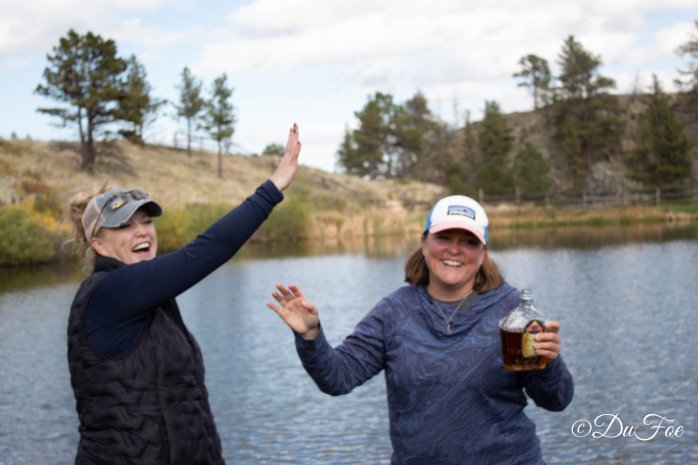 However, when the rod was delivered it went missing from my front step. It took me by surprise, but I wasn’t angry or upset. It was as if I knew it would be taken care of. Orvis replaced the rod immediately. Within two days I had another rod in hand and ready to go. So I happily went along my fishy way.

Imagine my surprise when we stepped outside on the day after Christmas, to find a beat up, water logged Orvis box on the front step. It was the missing fly rod. I contacted Orvis…they said the rod was mine to do with what I wished. Another rod! I was beyond excited! But even through the excitement of landing another rod…there was something nagging in the back of my mind. I couldn’t bring myself to open the box and use the rod.

In early January I joined the First Hunt Foundation through the encouragement of a friend and guide of one of my previous hunts, Fred. My birthday was on the horizon,  and a birthday fundraiser to benefit the First Hunt Foundation was what I had in mind. $500 was my goal. It was then that I decided to use the extra rod to encourage people to donate to the Foundation. To gain entries into the giveaway, people could donate or post about something that brought gratitude into their hearts.

The day to draw a name for the fly rod giveaway approached as the fundraiser closed. Another friend, Jason from Cowboy Drifters, donated a reel and line to outfit the rod. It was now ready to be passed on.

I loaded nearly 100 entries to the random name wheel and prepared to go live on Facebook to announce the winner. As I spun the wheel, my mind was racing with possibilities and the hope that someone would be chosen who could really benefit from a new fly rod. The first name that popped up on the spinning wheel of names was none other than….Fred! I chuckled at the coincidence of him winning the fly rod I was using to generate a fundraiser for the organization he introduced me to. He asked me to spin again, he was donating it to the next person on the wheel of names.

I spun the wheel a second time.

My friend and colleague, Ashley, was the next name to pop up out of the nearly 100 entries on the wheel! I was excited for her, as we had fished together before and I knew she would put the rod to good use. I ended the Facebook Live, satisfied with the giveaway and the amount of money raised for the First Hunt Foundation, which ended at $1,300.

But as I sat down to catch up on messages, it hit me.

She was the Shelley Simonton Scholarship recipient for 2019.

And out of nearly 100 entries, she also won the #onewoman fly rod tonight. 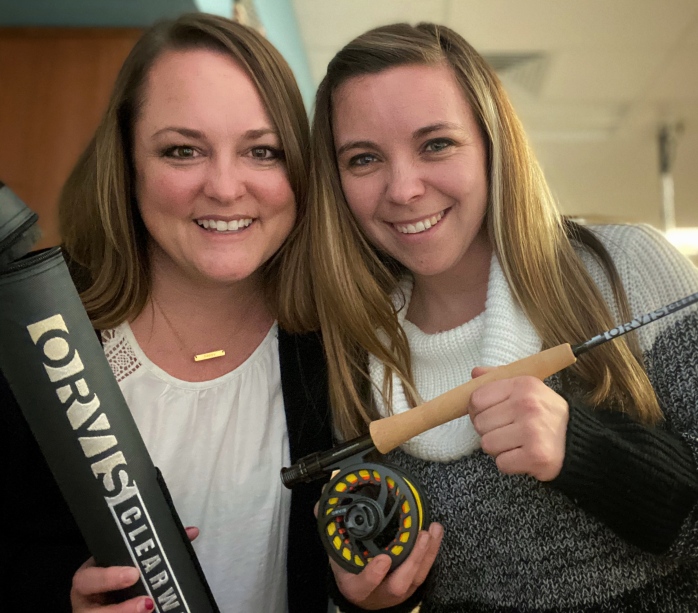 Tears streamed down my face. This is the moment when the Universe taps you on the shoulder and says, “Hold my beer. I’m showing you how I run the show.” It’s that moment when you know in the deepest part of your soul that your efforts have been acknowledged. This was a tip of the hat.

Every decision I make is directed by the Universe and is bringing me into my best life. And when I’m ready…when it happens, get a front row seat, because it’s gonna be amazing.

You have a purpose. Do your thing. Share your gift. Refine and develop this gift, and be ready to receive all the goodness coming your way. #onewoman

← Sisters of the Sage
This Goose Is Cooked →

Visit me on IG!

@havelyholt - follow me along on my adventures in hunting, fishing, and parenting.